Bruno is a versatile stylist , who share his artistic skills in fashion and styling universe all over the world and splits his time between Paris, London, Moscow and Cote d'Azure.

Bruno Haubert, Founder and CEO of the brand "Haubert", born in Paris, is a versatile stylist with enthusiasm, insight and creativity. He has traveled and earned industry recognition as an educator and artistic team member for major companies, including Dessange International, Frederic Fekkai and Prive. He discovered his love of the craft when he was a child, spending time with his father, hair salon owner. As soon as he was old enough to apprentice his dream began. Bruno's passion grew and he eventually became a Top Stylist at the young age of 21. Bruno finds his inspiration in seeing how beautiful and happy his clients feel when leaving his chair.

Bruno’s favorite way to express his creativity is through educating others. Teaching stylists from all over the world, his passion grew by the day. Through education program he was invited by Frederic Fekkai as a leader stylist to work in the United States. Bruno packed his bags and moved from Paris to New York to increase his client base and gain international experience.

Since 2010 Bruno is working in France again, and collaborating as a partner with John Nollet at "Cheval Blanc" Palace Hotel in Courchevel.

Now as a well-known celebrity stylist with ten years of teaching and working in the industry, Bruno Haubert is using the knowledge he has gained to create something truly unique. His new project is a salon and "outdoor" concept, working 24/7 in the comfort of your home, hotel's room, chalet etc. As a true artist, he is always up-to-date with the latest trends in both fashion and hair. Through his teachings and travels, Bruno has gained extensive knowledge from the industry and generously shares his expertise with others. Bruno works with a growing list of celebrities such as: Adriana Karembeu, Isabella Orsini, Jamel Debbouse, Vladimir Klitschko and many others.

Lesya's career as a hair and makeup artist began in Kiev where she was born. Since she was a small girl Lesya nurtured a passion for painting and history of art. As an artist, she involved herself with as many mediums as possible to express her creativity. She studied and graduated of Fine Art Institute of Kiev and realized that her love for the arts could be translated into hair and makeup.

At the age of 19 Lesya won a highly competitive contest among hair stylists and became the first Ukrainian stylist of the Dessange salon. During her career she worked with many Ukrainian and Russian artists and appeared on the pages of numerous fashion magazines, doing both hair and makeup for high profile photo shoots, fashion shows, multimedia videos and television, special events with celebrities. Her versatile and creative style can be seen in such publications as L'Officiel, Allure, Glamour Magazine. Recognizing her talent, Dessange promoted Lesya to color educator. In her new position she received an opportunity to travel around the country teaching French techniques of hair coloring at various salons.

After working in New York, Lesya came back to Europe and worked in partnership with John Nollet at Hotel Palace "Cheval Blanc" in Courchevel. Also Lesya works for the Film Festival of Cannes, she has also been trusted with the tresses of such stars as Nicole Kidman, Cecilia Sarkozy, Mazarine Mitterrand, Patricia Kaas, Natalia Vodianova, Ulyana Sergeenko and others. 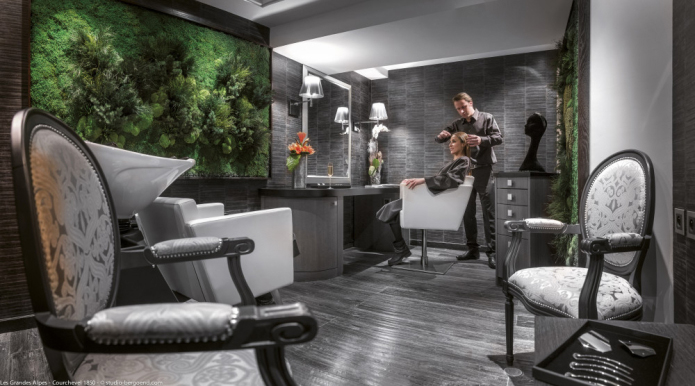 Philosophy of Haubert Paris – is to create a natural beauty, elegance, personalized style and quality of high-end services all within the privacy and comfort of your home, hotel room, chalet or office.

A makeover for a "red carpet" event or simply treating yourself to a luxury hair care - Hair Room Service Haubert Paris combines all the elements of a 5 star salon without even leaving your room.
We bring professional team of hairstylist or make up artist, quality of services, technical "know-how" and artistic skills, warm welcome in the atmosphere combining comfort and conviviality.

Hair Room Service is a concept of Haute Coiffure Service with recognized artists who deliver their expertise in a perfect custom haircut, with a beautiful styling or makeup by creating a personalized style for each client.

With the soul of artist, communicable and generous Bruno Haubert express his haidressing skills worldwide above all as a trainer of professional hairstylists.
Creative, with virtuosic gestures, he perfectly combines creativity and technical excellence, demonstrating that hairdressing can be a real art.
He performs with a knowledge that he learned with years of experience. The art of manipulating the hair, colors, shapes, cuts are important part of this art.

These unique and varied programs help you analyze and decrypt the personality, style and morphology of the face. Understanding the angles, lines, movement of the haircuts and subtlety of the different shades, tints and pigments of color. Protocol and etiquette in luxury beauty salons, the art of presentation and development of creativity of your team.